Alvin Toffler gained instant fame with the publication of Future Shock in 1970. He described the effects of rapid change on humanity's psychological and physical health, and it's not a pretty picture. In his view, chaos seemed just around the corner.

Given that we're in the midst of an unprecedented information and technology revolution, many would argue we still live with the constant threat of chaos. In other words, Future Shock may be as relevant now as it was 44 years ago.

But how accurate were Toffler's predictions, and how are we meant to cope with the technological maelstrom he describes? Here's a hint: 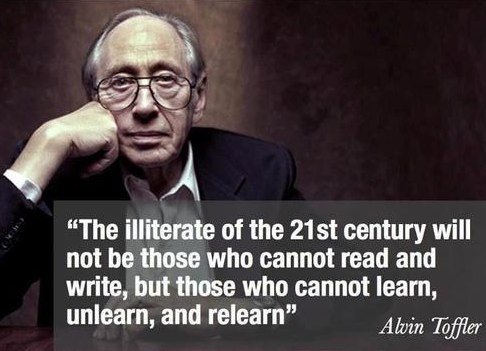 Toffler was well wide of the mark thinking there would be satellites orbiting the earth, with giant mirrors redirecting sunlight to where it would be needed most. The flooding of the interior of Brazil hasn't happened either. The university degree structure hasn't been dismantled, and despite some proposed legislation in Scandinavia, group marriage never took off. Computerised Decision Making (code-named OLIVER) never made it either. But perhaps Google is closer to OLIVER than we think, with its constant nudging of us towards our perceived needs.

Getting it wrong also extends to overlooking what did happen. As one might expect, he missed a lot of the technology revolution. There was no evidence in the book that he considered eftpos an eventuality, nor was there anything remotely resembling the internet and search engines. The possibility of ubiquitous mobile communications wasn't mentioned (even though this was the era of Maxwell Smart and his absurd shoe phone). I tried to consider what his reaction would be if he had known that I would be reading his book on a kindle, having first downloaded it wirelessly. And on the social front, the prospect of gender equality didn't resonate with him, the whole book being written using the pronouns ‘he’ and ‘his’.

But he was on the mark in predicting how people would respond on a human level to the rapid pace of change. He foretold of gay marriages and gay couples being allowed to adopt children, of 'trial marriages', and of increased rates of divorce and remarriage. We must remember that these were times when divorce was considered socially unacceptable and an unmarried couple were said to be ‘living in sin’. And gays weren't gay - they were 'queer'. He also predicted changes to the family, with widening age gaps between spouses, women bearing children later in life, reduced fertility and lower sperm counts, and the next generation of children becoming more ego-centric through his projected abundance of choice.

Toffler also predicted the now ubiquitous phenomenon of 'information overload'. So how do we typically cope with this constant change and impending chaos?

The denier of change decides not to engage in some area of technological change, while the specialist becomes absorbed in one area at the expense of all others. The revisionist resorts to adapting tried and tested solutions from the past, while the super-simplifier enthusiastically embraces technological fads, often without assessing the impact or relevance. Some of us will strongly follow a particular path while others (myself included) will use all of the above strategies to some degree.

What is common to all of us is the recognition that information overload surrounds us daily. Naively, Toffler thought we could plan our way through this problem and 'head it off at the pass'. The reality is that disruptive technologies and the current explosion of information are not capable of being tamed by applying pre-existing solutions onto a changing future.

AGILITY: THE ONLY PLAUSIBLE RESPONSE?

Toffler was extremely critical of the education sector for a curriculum that was based on applying lessons from the past that had no relevance for the future.

I think one of the exciting things we are seeing today is the uptake of the Agile framework as a solution that looks forward rather than back. It has been apparent to most of us that the waterfall technique that was borrowed from the US automotive industry and the heavy-handed bureaucracy of the project management world have not delivered timely and cost effective solutions. In fact, they're more likely to respond to their own failure by adding yet more layers of bureaucracy.

Agile is today's framework developed for today's problems. When implemented as intended, it breaks down bureaucracy just as Toffler advised. Of course, how it is implemented will largely depend on the degree of denial, specialisation, revisionism or super-simplification in play in your organisation. Awareness of our own shortcomings in these areas will help all of us solve today's problems for tomorrow (or is that tomorrow's problems for today?).