It's been a warm summer and I've been enjoying the fruits of my labour in the vege garden. I'm fully aware the economic case for growing your own vegetables doesn't really stack up, especially when you factor in the time spent weeding and watering. But I just love being able to pick and serve fresh, homegrown, tasty, pesticide-free meals for family and friends.

I could take the easy route and just purchase veggies from the supermarket, but my feeling is that the primary commercial driver for the supermarket is to stock produce that will sell well because it looks great, rather than because of its flavour or nutritional value.

But there's a bigger trend than flashy marketing at play with food these days. Given our busy lives and near obsession with convenience, food has increasingly become FaaS (food as a service). The 'service' could mean a packet of varied salad leaves washed, mixed, and ready to eat with a pre-measured and perfectly matched pack of salad dressing. Alternatively, it could be pre-cut veggies sold with the appropriate soup stock and served with a pre-prepared garlic bread. FaaS isn't my cup of tea. Although I'm bucking the trend, I don't mind the extra effort required to serve friends an enjoyable meal. 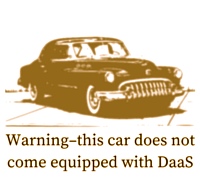 A friend with similar sensibilities has applied the same logic to his vintage car. When he takes this car on a road trip, not only is he up for a slow trip exposed to the elements, he also fully expects his car to break down every few hundred kilometres.

And guess what - he loves it! That includes getting out on the side of the road to work out what has broken and how to fix it. Since parts aren't readily available for vintage cars, these repairs often require considerable ingenuity, skill, and labour.​​

Until fairly recently, this level of skill was necessary for anyone who wanted to drive. In my parents' day, cars were becoming more ubiquitous but were still relatively 'high needs'. This meant that everyone's dad was a backyard mechanic, and weekends were spent under the car or the bonnet doing preventative maintenance.

That all changed when the Japanese motor industry introduced streamlined manufacturing that focused on reliability and efficiency. Over time, fixing parts was no longer cost effective and the job of a mechanic became that of 'parts replacer'. This trend has continued, with mechanics now becoming diagnostic technicians. Even my relatively unsophisticated car has over 50 sensors, such as those measuring the exhaust for particulates and temperature to provide instant feedback to the carburettor.

Given the current conditions of high reliability and high complexity, drivers have willingly traded in expert knowledge and hands-on daily maintenance for the simple function of travelling from point a to point b.

This trend is now being extended to include even the act of driving itself by means of DaaS (driving as a service). My Google Navigate smart phone app will get me where I need to go, and Google Calendar will let me know when I need to leave to arrive on time. These days cars also routinely come with sensors that keep you firmly in your own lane, and prevent you from reversing into unseen objects. And of course driverless cars are just around the corner with the release of Google's recent prototype.

HAVE WE ARRIVED AT GISAAS YET?

I can't help but notice the similarities between the days before FaaS/DaaS and my own experiences in the early days of GIS. They included hours spent writing fixes for software that didn't work or didn't do what was needed, or data that couldn't be cajoled into participating in a process. Or sometimes it was programming in low level languages such as assembler, or printer languages such as pcl5 or hpgl and writing your own buffer functions. Crikey, those were the days!

So if we look at the NZ geospatial industry in relation to the broad-ranging move towards 'aaS', where are we now and where do we need to be heading? What trends do we need to take heed of and what trends should we be taking the lead on?

The first thing to note with my tongue-in-cheek rendering of DaaS is that it is very geospatial. But it's also significant that these developments in transport are taking place outside and around our industry rather than from within it.

Rather than GISaaS, most industry effort is going into the provision of 'raw materials', for instance data services such as wfs and wfs-t. You can get the data, but it still takes power user skills to add value and achieve what you want to achieve. Using the motor car analogy above, this puts our industry in the 'everyone's dad is a mechanic' stage on the evolutionary growth path.

Some geospatial vendors are starting to provide analysis services, but at this early stage the services are very generic. While they tick the boxes for simplicity, they still lack the statistical robustness required to be reliably valid. One of the hallmarks of 'aaS' services is that the user is isolated from what goes on 'under the hood'. All they're meant to understand is the result that is delivered to them. If it isn't robust or valid the user could be unknowingly making poor decisions.

With a driving directions service, it's very clear to the service provider what the customer needs. It's also very clear to the customer when the results are less than optimal. This is not yet the case with geospatial analysis services, but needs to be. It has long been an issue in our industry that maps of dubious use, untested rigour, and shoddy underlying data continue to be used unchallenged for their reliability, accuracy and meaningfulness. If we aspire to genuine GISaaS, this olde worlde culture needs to change.

Unlike the norm with FaaS (food as a service), we shouldn't be aiming to produce something that looks good but isn't very nutritious. The goal for the geospatial industry is to identify high value, repeatable, fully automatible, fast performing, and most importantly, rigorously reliable services. These can either be ubiquitous, like Google driving directions, or bespoke to meet a niche business need.